For the past few years, it seems like spring has been chronically early in the US. While certain regions are still likely to see one final hurrah from winter — in the form of a nice snow storm, most likely — many parts of the country have been experiencing much warmer weather. If you’ve noticed yourself reaching for allergy medicine already, you might be excited for the warmer, damper weather but not for a stuffy, runny nose. This kind of early spring has has caused trees and flowers to bloom weeks early and is ushering in one heck of a spring allergy season.

How early is spring this year?

According to the US Geological Survey (USGS), spring is arriving “. . . at least 2-3 weeks early across almost the entire Southeast, from San Antonio to Atlanta to Washington, D.C.  This unusually early spring is likely to keep rolling north, already bringing surprising signs of spring to portions of the central Midwest and northeastern states.”

USGS reports that a new set of maps from the USA National Phenology Network “shows how ahead of schedule spring is” all across the US. These maps show that “spring is making an appearance in coastal California, southern Nevada, southeastern Colorado, central Kansas, Missouri, southern Illinois, Indiana and Ohio. And it’s rolling up across West Virginia and Virginia, soon to hit Philly and Indianapolis, but it’s already sprung…across the southern Great Plains and SE Atlantic Coast, and it was 22 days early in Washington, DC!” 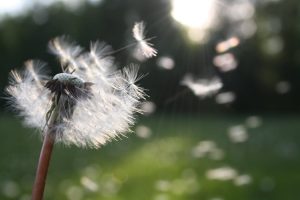 FoxNews reports that in parts of the mid-Atlantic and Ohio Valley that typically have snow on the ground in late February and early March, allergies are already beginning to increase, thanks to only short bursts of cold air, AccuWeather Senior Meteorologist Alan Reppert said he expects this trend to “continue into the northern Plains and Northeast even with a much earlier start to the pollen season.”
An article in USA Today quoted Rick Pudwell, director of horticulture at Memphis Botanic Garden, who pointed out that many of the trees and plants in Memphis are about a month ahead of schedule. In New Jersey, the recent warmth has caused tree and shrub buds to start blooming early. In Southern states with unpredictable ends to the winter season, spring can arrive while other states are still typically encased with snow. In eastern Texas, tree pollen was a major concern by mid-February. Dr. Jonathan Buttram with UT Health Northeast told KETK, “Because we’ve had rain and it’s warmer temperatures, the molds are high,” Jones said. “So in the field, you identify all the different trees, weeds, grass, and mold.” Dr. Buttram also noted that nasal medicine is the best way to get rid of allergies. “For people who get allergies every year, they should start taking allergy medicine two weeks before allergy season starts.” In North Texas, it was cedar and pollen wreaking havoc by January.
In Chicago, Dr. Sindhura Bandi, an allergy and immunology specialist at Rush University Medical Center, told CBS local affiliate that “the weather already has brought out allergens for some patients, because it’s been too warm to snow, and rain carries mold and pollen spores. If we don’t end up having another snow or frost, what that means for allergy sufferers is that they’re going to have a longer season of their spring allergies,” she said.

What are ways to avoid taking over the counter allergy medicine?

Keeping windows closed according to Lily Pien, M.D., of Cleveland Clinic. For those who really suffer from spring time allergies, allergen avoidance is the best measure. She told KDRV, “As much as it sounds cruel, we shouldn’t be opening our windows if we are allergic to the tree pollen or the grass pollen because you do want to have one safe haven where you don’t have exposure to the pollens,” said Dr. Pien. She also iterated that while avoidance is best, over-the-counter allergy medicines can also help relieve symptoms.
Allergy-free indoors is also another way to avoid taking allergy medicine and certainly one remedy for dealing with the early onslaught of allergies this year. Cleaning can also help to make sure your indoor air is as allergen-free as possible. Most people spend 90% of their time inside — and this percentage is even greater in times of inclement weather or in regions with poor air quality due to pollution or airborne allergens.
Clean habits also help when you do venture outside during high pollen and allergy season, for example leaving your shoes at the door when you come back inside. Showering helps eliminate pollen and allergens that may have settled on your skin and hair, and helps you prevent transferring them to other areas of your house. Choosing a high-quality air purifier is also a great idea — and there are air purifiers designed specifically with allergy-sufferers in mind.
Cleaning the surfaces is additionally helpful, your home can hold lots of allergens (especially flooring, countertops, and upholstered furniture). Surface cleaning can help eliminate allergens that may have found their way inside. Another good idea is to eliminate the extra moisture that might have accumulated in your home, especially if your region has experienced an atypically wet winter, or an early, damp spring.
Staying Dry with a dehumidifier can go a long way to keeping you dry and healthy, helping prevent mold from forming, growing and then becoming airborne in your home. If you or someone in your family has a mold allergy, you know how important that can be!
Some of our best selling products for allergy sufferers at AllergyBuyersClub:
Tags:Air Purifiers, air quality, allergies, hepa air purifiers