Q) What will a HEPA air purifier do?

A) By government definition it must remove 99.97% of all particles 0.3 microns in size, which would include pollen, mold spores, most pet dander, and fine particle dust. 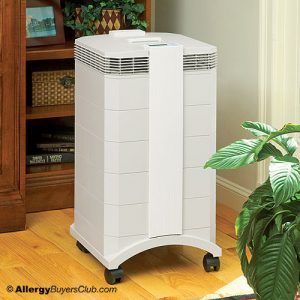 Q) Will I have to dust after I install a good HEPA air purifier?

A) Unfortunately, yes. Only a minor % of the visible dust is removed. These units are designed to remove the extremely fine, invisible particles of dust that affect our lungs and seem to float in the air forever. The larger dust particles that we see on our furniture and window blinds will mostly land on a surface before they are pulled into the air purifier because they have weight and gravity is pulling them downward

Q) What is a HEPA filter? (High Efficiency Particle Accumulator)

Q) What is a prefilter?

A) A filter designed to take out larger particles so that the HEPA filter can work at it’s best since it won’t be clogged with these larger pieces.

Q) What is a carbon filter?

A) A filter made out of carbon to remove odors and gasses. In a home these could be formaldehyde from carpets, plywood, compressed wood furniture; cleaning fluids and polishes; food odors; nail polish and remover; paint; etc. (some carbon filters may have added chemicals for specific chemical removal such as formaldehyde)

Q) What is a HEGA filter?

A) A High Efficiency Gas Accumulator filter that the Austin company designed for the British military for their gas masks and is quite good for tobacco smoke removal in addition to everyday household odors and gasses.

Q) Can a carbon filter remove carbon monoxide or radon?

A) They cannot remove carbon monoxide, carbon dioxide, or propane. Possibly some will remove up to 20% of radon, but the best solution for radon is to vent it to the outside.

Q) Can a filter remove bacteria and viruses?

A) Most bacteria will be removed, but only a few air purifiers will remove viruses (like the IQAir air purifiers).

Q) What does VOC stand for in a carbon type filter?

A) A Volatile Organic Compound is a carbon base (petrochemical) liquid that can evaporate at room temperature. IE: paint or thinner, nail polish and remover, turpentine, gasoline, benzene, cleaning fluids, etc. An example of what is not a VOC would be water and chlorine (bleach) that will evaporate at room temperature, but does not contain carbon.

A) Ultra violet does not kill mold but it attacks the DNA so that it can’t reproduce.>Most bacteria will be caught in the HEPA filter, but those getting through would be killed (as would viruses which will get through) if the UV bulb is strong enough, and the particles passed the bulb slowly enough and close enough to the bulb. It could be a good choice for people trying to control mold, bacteria., or viruses but there is no 100% guarantee.

Q) How come Consumer Reports doesn’t rate many of the brands that you carry?

A)Consumer Reports seems to test those units that have the largest sales figures, which are usually nowhere as good as the high quality brands that we carry. They also are testing for between 6 and 24 hours. We really don’t care what happens in 24 hours. Our testing is over periods of time up to 1 year. What good is a filter that works very well for 24 hours but has its efficiency reduced tremendously over a few weeks or months? We sell products for long term-sustained usage.

Q) Can I have my windows open?

A) No. An air purifier works by drawing the same air through it over and over making it cleaner on every pass and if you have windows open you will constantly be adding new allergens.

If you are one who cannot sleep without a window open, you could use a purifier that blew the clean air out of only one side, so that even if the room were full of allergens, you could position it so that the clean air blew over the air space from which you would be breathing. 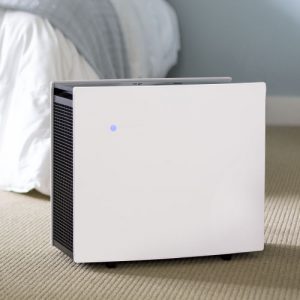 Q) How come I can buy Hepa filter air purifiers from discount stores for under $100?

The units we sell are from companies that have been in business for years and years.

The cases on the store units use a plastic that gives of gasses (called off-gassing).

Q) Are there air purifiers that don’t require filter changes?

A) Yes, there are ionizers that only require you wipe down the metal collection plates, but they produce ozone that is a known respiratory pollutant and irritant (and we are in the business of helping lungs and not polluting them) and quoting an article in Consumer Reports, “Sharper Image, Honeywell, and Hoover precipitators are quiet and cost little to run. However our tests show that they are not effective.”

A) In small quantities, probably not, but there is a crossover point at which it is harmful especially to people with asthma or emphysema (see below).

According to the website of the US Environmental Protection Agency www.epa.gov

What are the health effects of ozone?

Ozone can irritate the respiratory system, causing coughing, throat irritation, and/or an uncomfortable sensation in the chest.

Ozone can reduce lung function and make it more difficult to breathe deeply and vigorously. Breathing may become more rapid and shallow than normal. This may limit a person’s ability to engage in vigorous activities.

Ozone can aggravate asthma. When ozone levels are high, more people with asthma have attacks that require a doctor’s attention or use of medication. One reason this happens is that ozone makes people more sensitive to allergens, the most common triggers of asthma attacks.

Ozone can inflame and damage the lining of the lungs. Within a few days, the damaged cells are shed and replaced much like the skin peels after a sunburn. Animal studies suggest that if this type of inflammation happens repeatedly over a long time period (months, years, a lifetime), lung tissue may become permanently scarred, resulting in permanent loss of lung function, and a lower quality of life”.

And according to the American Lung Association
Ozone (chemical symbol: O3) is a highly reactive gas that is a form of oxygen. It results primarily from the action of sunlight on hydrocarbon vapors and nitrogen oxides emitted in fuel combustion. Ozone reacts chemically (“oxidizes”) with internal body tissues that it comes in contact with, such as those in the lung. It also reacts with other materials such as rubber compounds, breaking them down.

Ozone acts as a powerful respiratory irritant at the levels frequently found in most of the nation’s urban areas during summer months. Ozone exposure may lead to:

Q) Will an air purifier remove a mildew or moldy smell? Or a pet odor?

A) It is easy to assume that gas filters (carbon) are a cure-all for all gas and odor problems such as mold or smoke. Gas filters work best on “finite” odors; that is, odors that end. If someone wearing perfume walks into a room and eventually leaves or someone cooks food with an odor, those odors and gasses will only be reduced somewhat when occurring, and eliminated only when the perfumed person leaves the room or the cooking stops. But if you spill perfume on the carpeting, live above a restaurant, or have mold growing, you can only reduce these odors slightly. You cannot totally eliminate them because these odors and gasses are constantly present. You must remove the source.

The best way to eliminate a mold or mildew odor is to bring the humidity below 50 with a dehumidifier that will put the mold into a “hibernation” state. This humidity level does not kill the mold, but it stops it from growing and “breathing” that gives off the mycotoxins that we smell. The mold can start to “breathe” again if the humidity level goes above 50% for more than about 72 hours, so constant dehumidifying is necessary. 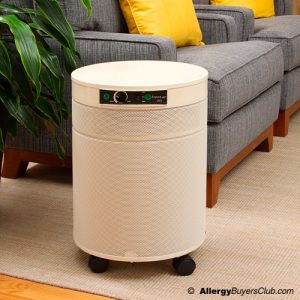 Even if mold has been stopped from “breathing” or is even killed, unless it is actually removed, the spores can still cause an allergic reaction and using an air purifier is advised. Use of an air purifier will help alleviate some of the symptoms of the mold by reducing the air born mold spores. Also, if it has an activated carbon gas filter it will adsorb some of the mycotoxins from the mold if it is toxic. Keep in mind, however, most carbon gas filters are going to be in the range of 70 to 90 percent efficient at removing the gases from the air. Therefore, as in the case of the mold spores, it will help alleviate some of the symptoms but is not a cure-all.

You will need to eliminate the source of the mold by cleaning and removing it in order to reduce the mold spores and possible mycotoxins they are emitting. We recommend the use of an air cleaner to help reduce some of the symptoms until the source is removed by cleaning. Furthermore, it’s use afterwards is warranted if the end user is allergic to mold and wants to maintain a low mold particle count.

AllergyBuyersClub.com has an extensive range of air purifiers comparison charts, with reviews and ratings plus helpful articles on air purification. Additional questions call us @ 888-236-7231