Q. I ran across your site and am so hoping for a suggestion. We are at our wits end with our living situation. We own an older condo and have neighbors near us that smoke profusely. Our neighbors may just as well be smoking in our home because our whole condo constantly smells of smoke. It seeps through the vents, piping, etc. We both have allergy problems and are desperate for a solution. We’ve started researching ozone machines and other possibilities but don’t know what to do. There is so much conflicting information on the internet and we’re not sure what, if any solution, would be best.

Do you have any suggestions or ideas on how to eliminate the terrible second-hand smoke we’re experiencing? We would be truly appreciative.
Regards,
Seth and Heather 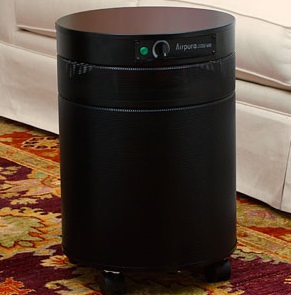 A. The advantage of an electronic air cleaner, or ionizer, is that they tend to be quieter than the HEPA air purifiers because they do not have the large resistance to the air movement the HEPA air cleaners create. Ionizers can clean a large amount of air while at the same time being quiet, allowing them to clean the same or more amount of air with a smaller fan. However, any time you use an ionizer there will be ozone generated. How much actual ozone is created will vary depending on the machine. There are some machines out there where the smell of ozone is really noticeable. The question as to whether it is harmful will depend on how much actual ozone is generated.

The American Lung Association states that low levels of ozone are safe but high levels can be damaging to the respiratory system. The third oxygen molecule in ozone is the issue to the tissue in your respiratory system because it chemically reacts with whatever it comes in contact with and breaks it down and hurt your body. The oxidation of your lung tissue is a major concern as to the affects it will have on the health of the tissue. In addition, ozone has a third oxygen molecule and it is this third molecule that chemically reacts with the gases in the air and breaks them down into another form.

The American Lung Association is concerned that the byproduct may be more harmful than the original gas present in the air. The odor of the ozone is bothersome to some people and its affect on people will vary. Many manufacturers of ozone producing air cleaners will boast that their machines clean the air of harmful gases, chemicals, and odors yet have no claims to back them up. The other main concern is what happens to the ionized particles that make it back into the air? It is believed they are more apt to stick to the lung tissue and become an irritant to the allergy sufferer if inhaled into a person’s respiratory system.

An effective ionizer does emit high levels of ozone but high levels of ozone have been determined to be detrimental to the respiratory system. There to run this machine effectively to get rid of the smoke, you will have a problem; to run it at safe levels and has little affect, or on high levels where the concentrations could be dangerous to humans. In addition, the question of particulates in the air is not even addressed since there are no filters to remove the particles. You may be familiar with their use in the hotels where to prepare a room for a customer the machine is put in place and the machine turned on high. The windows and doors are closed and the room is left unoccupied while the machine does its thing, which is usually to remove the smoke. Once the room is cleaned they will go into the room, turn off the machine, and open the windows to air it out. As you can see it is obvious that the ozone is a concern to human health.

Why an smoke air purifier?

The best way to address your smoke issue would be with an air cleaner with its own gas filter consisting of activated carbon to adsorb the gases and odors from the cigarette smoke. You will also need a HEPA filter to collect the visible smoke, which consists of millions of tiny particles as small as .01 of a micron. It is helpful to have as much as the solid and liquid particulates filtered out before the air with the gases comes in contact with the gas filter. The reason is that the pores of the carbon can become clogged with the particulates and they deem the gas filter unable to take in the gases and odors, which it is designed to do. Smoke in particular will use up much of the carbon because of the small size and quantity of the smoke particulates. The final requirement is to have some type of filtration after the gas filter to prevent any of the carbon that breaks off from circulating back into the room. 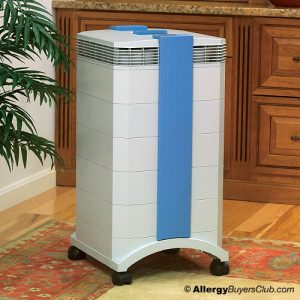 My best recommendation would be for you to consider the IQAIR GC Multigas air cleaner. This would provide the air to be cleaned of the particulates first, and then four large gas filter cylinders remove the gases and odors. Finally, each gas filter cartridge has its own post filter sleeve wrapped around it to prevent any of the carbon dust from exiting the machine and circulating into the room. It will cover a room up to 900 square feet.

There would be two less expensive alternatives but their major drawback is that the air circulates initially through inefficient pre-filters before entering their gas filter media so many of the pores will be clogged prematurely which will disable its ability to eliminate the gases and odors. However, they make up for it by having large amounts of gas filter media. These units will clean a room up to 1000 square feet. 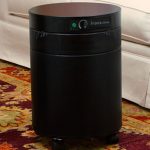 The second one is the Airpura T600 Smoke Air Purifier. It has a micro-HEPA filter to for the small particulates and 21 pounds of carbon. However, again it has an ineffective pre-filter that will eliminate particles down to 5 microns. Therefore, a great deal of the pores in the carbon will be blocked up by the smaller particulates that the pre-filter fail to take out. The micro HEPA filter will prevent any of the carbon particles from getting back into the air in the room.

Seth, I hope this will help you in making a decision?