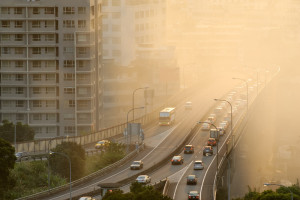 Airborne particles which you breathe in without thinking about it, can be a major health risk factor both indoors or even outdoors in some major cities. If you live in a smog or otherwise polluted city area, the concentration of hazardous particles will be higher indoors than if you lived in a clean suburb or country area.

Everybody can do without breathing in these particles, but the young, the elderly, and those with respiratory ailments such as COPD, asthma or allergies, and all those with heart and lung problems are particularly at risk. Symptoms such as coughing, tightness of chest, eye irritation can occur while unseen damage is occurring to your lungs.

Anybody who has visited China in the last decade can testify that the high pollution levels can instantly make the average American or European very sick indeed within hours of arriving in that country, proving that pollution is not to be trifled with. This author can testify to that from first hand experience.

It is the smaller particles, 2.5 microns or less which are of most concern, often referred to as lung penetrating particles, although larger particles found in wind blown dust or fires, present their own health challenges.

When those who are at higher risk physically exert themselves, even when doing something ostensibly healthy like taking a jog, they breath in more air, and if the air is unhealthy, this can cause health problems. Bear in mind that pollution levels can vary enormously on a daily basis, so it is important to monitor your local levels through your weather channel. While the level of risk throughout a person’s lifetime varies, other illnesses associated with the aging process such as cholesterol, diabetes or high blood pressure seem to exacerbate susceptibility to poor air quality. There is also some increasing evidence that poor air quality may have a role to play in infant low birth weight or even infant death. There are numerous studies which have documented that poor air quality is linked to increased emergency room visits or hospital admissions. If you are in one of these higher risk groups, it is particularly important to follow your doctors orders for symptom control and heart patients should be mindful that heart attacks can occur without warning.

What is particle pollution? Particle pollution is a mixture of microscopic solids, and pollution levels are higher near busy roads; exposure to these high particles levels increases the chance of their entering your bloodstream. Even healthy people can experience symptoms from larger particles such as irritation of the lungs and throat, coughing; phlegm; chest tightness; and shortness of breath.

Fortunately, particle levels can be controlled indoors with the use of better quality air purifiers. Be mindful that only certain air purifiers put out by IQAir, Blueair and the QuietPure Home are capable of capturing these smallest of particles. You can also help yourself by not burning fires, wood stoves, smoking, or burning candles which are all sources of indoor air pollution.

For monitoring local outdoor levels of air pollution , www.epa.gov/airnow is a web site that gives daily information about air quality, including ground-level ozone and particles, and how they may affect you. Wikipedia gives a detailed explanation of the air quality index and how it is used world wide.