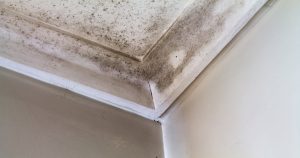 Mold has long been regarded as a less-than-desirable formation that most homeowners could do without. And although it falls into the very definition of being organic, mold has the potential to be very damaging to the health and wellness of humans and pets. And the presence of mold in an indoor space can pack a very unhealthy punch, especially for those with existing respiratory challenges like allergies, asthma or COPD.

According to National Capital Poison Center, mold is a “non-scientific term for many types of unwanted fungi found both indoors and outdoors. Although mold and its spores are literally everywhere, active mold growth requires moisture. It can be visible on surfaces, but it can also lurk behind drywall, in attics, or under carpets – any place where dampness and humidity are present.”

Although outdoor mold can certainly stir up symptoms for those who are sensitive, its presence and build-up indoors is particularly problematic. According to the EPA, most people spend about 90% of their time indoors – which means they’re exposed to whatever is circulating in their home or office. Posion.org reports that “people who spend time in such environments sometimes complain of respiratory effects, headaches, and other physical symptoms….Experts also found that being in damp indoor spaces seemed related to respiratory illnesses: nose and throat [upper respiratory] symptoms, cough, wheeze, and asthma symptoms.”

The first thing to do in order to stop the mold growth is to cut off its food source: moisture. Any major leaks or spills will need to be handled professionally. Normal condensation, or other sources of humidity and/or wetness will need to be addressed as well, though a simple fix like adding weather stripping or adjusting the settings of certain appliances. Depending on the situation, a dehumidifier can be a great tool to utilize for indoor spaces with excess moisture.

After moisture issues have been handled, and moldy objects have been removed (insulation, padding, sheetrock, boxes, etc.) it’s time to address the air quality in your home, which would definitely be compromised by airborne mold spores. A cursory cleaning of your home’s surfaces is in order to remove any residue or accumulation of contaminants. While it can be tempting to clean with harsh cleansers, bear in mind the fumes and chemicals designed for cleaning can also be toxic, further adding to the reduced air quality inside your home.

The addition of an air purifier to your home can make a measurable difference in both the air quality and the smell – and homes plagued by dampness and/or mold would have an unmistakably musty odor. Using technology instead of chemicals or fragrance, the right air purifier can destroy up to 99% of contaminants in the air and on surfaces, making your indoor air fresher and cleaner.