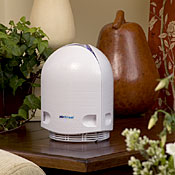 I purchased 8 AirFree units and placed them in the Big House of Houmas House Plantation and Gardens. They were placed in each of the 4 main rooms on the first floor and one in each of the bedrooms on the second floor of the Mansion.

I placed them there, because my dogs Princess Grace and King Sam were having odors because of swimming in the ponds. When you walked in the Mansion, you could smell dog hair odor. After placing the AirFree units in each of the rooms, the odors disappeared. We actually have guests who come to Houmas House and say that they are surprised that an old house like this has no odor. Some have actually said that they find it hard to believe that dogs live in the house, because of the lack of odors. I suggest that they buy the AirFree.

The Houmas House Mansion was built in 1805, is known as the Sugar Palace, and is the Crown Jewel of the Great River Road. Our collection of antiques and artwork is protected from mold damage and odors by the AirFree.

It is hard to believe that a small silent machine can make such a difference in living in an historic residence.

See the AirFree air sterilizer and the entire selection of air purifiers at Allergybuyersclub.com