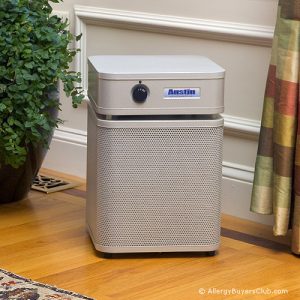 I purchased and received approx. 3 months ago the Austin Healthmate Plus air purifier. As you know, there is no direct way of knowing the effectiveness of this particular brand because of the way they report their measurements. (I don’t remember the details now, but there are standard units for determining effectiveness yet Austin does not provide their product information in these units).

Within the last 3 days I have become concerned that the Austin Healthmate Plus may not be doing the job that it promises. This is what happened: I was cooking something and fell asleep and was awakened by the smoke detectors. My small apt. (700 sq. ft) was filled with smoke. I opened all windows, ran the air cleaner etc.

Now 3 days later the odor of smoke is less apparent, but the air stream exiting the air purifier smells of smoke. I’m quite concerned that the unit somehow retained the smoke inside or the smoke particles got trapped in the filter.

I’m rather concerned — after the considerable expense — that the unit has been rendered useless or even dangerous to breathing.

I would appreciate a response at your earliest convenience.

Evidently, what has happened to your air cleaner is the gas filter has adsorbed all of the smoke particles plus any of the gases and odors in the smoke resulting in it becoming saturated prematurely.

Keep in mind, Austin Air says the warranty on the carbon filters for the Healthmate and Healthmate plus is voided if the customer uses them for removing smoke.

The reason is the way the Austin Air Healthmate and the Healthmate Plus are constructed.

In these two models the air first passes through the pre-filter, which is not as efficient as say the IQAir’s pre-filter, so none of the smoke particles are removed by this filter. Next, the air passes through the carbon and zeolite filter where the millions of smoke particles, which are anywhere from 1 micron in size to as small as 0.01 of a micron, pass into the many micro pores of the activated carbon. What happens then are these pores become basically used up pre-maturely not able to remove any more gases and odors. Therefore, if this filter is not replaced, it will begin to outgas what it has adsorbed. This is what you smell.

The Austin HEGA is more suitably designed for smoke principally due to the fact the HEPA and Gas filters are reversed. After the air passes through the pre-filter, it passes through the HEPA filter where the microscopic smoke particulates can be removed. From there the gases, chemicals, and odors remaining in the air can be removed by the micro pores of the activated carbon, which in this instance have not been filled by the smoke particles. These pores are able to do what they were designed to do which is remove the gases from the air. This is the unit that Austin will stand behind regarding the warranty on the filter life if used in a smoke environment.