Test-driving a WhiteWing Vapor Steam Cleaner on a Nasty Job 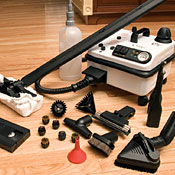 I woke up on a recent Sunday morning with plans to indulge myself with a trip to the local nursery to buy some plants from my yard, and perhaps sneak in nine holes of golf towards the end of the day. My reverie was abruptly interrupted by my husband, who told me that the priority of the day was for me to clean up one of our rental properties with a steam cleaner. You should know that even though I sell these machines, cleaning is cleaning and not my picture of how to spend an idyllic Sunday. With remarkable good grace, I acceded to the change of plan and took a WhiteWing steam cleaner down to do its magic on a piece of property, which while only 6 months old, was looking, as my Mother would say, like a “pig pen”, as the tenants had done a moonlight exodus. My heart sank when I opened the front door and saw the mess and the dirt. However, with my Sebo C3 powerhead canister vacuum to clean the carpets, while the WhiteWing steam cleaner heated up, I rolled up my sleeves ready for action. This is a summary of what happened.

1. The bathtub could not have been cleaned in six months and the dirt was caked on. Using the small round brush on low pressure after spraying the area with Formula 212 spot cleaner to loosen up the dirt, the filth finally came off. It did not do any magical disappearing act like in an infomercial. I still had to use some elbow grease, but I was clear that without the steamer I would not have even begun to make a dent.

2. The toilets were in a similar state, beyond description in polite society. Using the regular little nozzle brush around the rim and other medium round brush below the water line, this time I did produce miracles in a way that was satisfyingly painless.

3. The counter tops in the kitchen had encrusted pools of something dark and sticky like molasses. The large triangular brush wrapped in a towel blasted through that mess in a very efficient manner and lifted it right off. Then I continued with the rest of the counter-top, which ended up silky smooth after the steam cleaning.

4. I could not believe that an oven top could get so filthy in such as short time. Using a combination of brass nozzle and small round brushes I manage to get the stove- top to look almost brand new again, but it did take a little time to get there. However, cleaning the microwave was a slam-dunk.

5. My final area of action was the tile floor. No problems in the bathrooms but the kitchen presented a challenge. I stared at it mournfully- stains all along the grout lines and goodness know what else stuck to floor. So I put a brass nozzle brush at the end of the wand and ran it down the grout lines and over the sticky spots. Here I was truly amazed. The dirt really did lift off without effort on my part, and then I went over the whole floor with a towel and the floor brush. My only grumble was I had to back off sometimes and let the pressure build up again to optimum levels. Something that doesn’t happen with my Ladybug continuous fill steam cleaner.

So I ended up two hours later, sweaty, tired, but triumphant. My husband emerged from the basement where he had been cleaning up and just said “Wow! That thing really makes a difference.” And it smelled really clean. Did I ever get to pick flowers or play golf? Sadly no, it started raining and I could feel a nap coming on. Such is life, but I did gain brownie points with my husband. And as for the Whitewing Steam Cleaner, clearly impressive performance for the money.