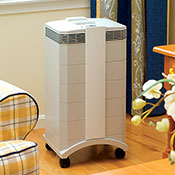 Both the IQAir and the Airpura are excellent air cleaners. Both units are for serious allergies and rate the two highest on our websites. There are some differences however, that will explain why it may appear the Airpura at first glance is a more efficient, valuable machine but on closer inspection, it is a tougher call to make between them.

The IQAir does not have as many air changes as the Airpura air cleaner, but it makes up for it based on the fact that the machine efficiency is at least 99.99% down to 0.3 of a micron and larger and 99.5% efficient on the remaining particulates including particulates as small as 0.003 of a micron. Therefore, the IQAir HealthPro Plus air cleaners should in reality clean as much air in a 600 to 900 square foot area as the Airpura air cleaners.

Regarding the gas filters, the Airpura filter consists of 18 to 26 pounds of carbon depending on the model. That is one of its chief strengths. However, the life of a gas filter is directly proportional to how much it is exposed to particulates. The pre-filter on the Airpura will filter out particulates 5 to 10 microns and larger which means a large number of smaller particulates will fill the pores of the carbon in the gas filter. Once the pores of the carbon become clogged they are not able to adsorb any gases and odors. Contrary to this, the V-5 gas filter in the IQAir should be able to perform as long as the Airpura because of the fact its pre-filter will remove 90% of all the particulates entering the air cleaner.

Many of our customers are concerned with mold right now, which is why we particularly like the Airpura air cleaners for areas such as moldy and musty basements. However, the IQAir makes up for this shortcoming by removing almost everything on first pass, that goes into the unit from the air (known as its “Efficiency”). This near 100% efficiency should in theory, attain approximately the same result as the Airpura by not allowing the particulates from circulating in the air to be inhaled. In addition, in the case of mold, whether it is dead or alive, is not as important as removing it from the air, because it is the inhalation of particulates that provokes the allergic reaction.

In conclusion, I want you to understand that both units are excellent air cleaners and achieve very good results through the use of differing but similar technologies. In my opinion, the IQAir has by far the superior pre-filter of any air cleaner in the industry and is among the easiest when it comes to changing filters. The efficiency of its filter system in my personal testing of all the machines is second to none. The Airpura unit is however a very powerful unit with a substantial amount of carbon fill, and because it does not have the extra heavy duty pre-filter of the IQAir, covers more square footage.

(Editor’s note. We debate the pros and cons of these two machines here in the office constantly. Both are very effective as per our ratings on our site. Personally, I like the Airpura unit for strong odors, smoke and musty smells. I prefer the IQAir as an all-around unit because of design and ease of use features.) 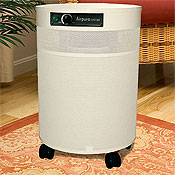 See all Air Purifiers at Allergybuyersclub.com